In her latest body of work, Measured, Sue Lorraine abandons the usual processes of a maker, where raw materials are forged into a finished product according to a preconceived plan. Instead, she allows her materials to lead her to a set of outcomes that she could not always have predicted and which obey a kind of wayward logic of their own.

Several of the works involve the manipulation of found objects, which she nudges off their functional course to see what happens next. In Longer Than Expected, for example, she cuts up triscale rulers, reassembling them into errant objects that breach their confining linearity to rear up into three dimensions. In Poised and Leaning she equips an old set of dividers and a found spirit level with sprung wire feet that cause them to tilt and point into the surrounding air. These interventions invest Sue’s objects with a vital kind of energy. It is as though, liberated from their function to accurately measure the world, they take on a life of their own and become almost creature-like.

The exhibition’s title is a provocation. What, after all, is being measured in these speculative exercises where measurement is removed from the equation? Sue says that this work is about attempts to measure the immeasurable, specifically time. However, it’s fairly evident that she is not interested in the dry, linear account of seconds, minutes, hours and days offered to us by our clocks and watches. Rather, she seeks to account for ways we measure the subjective experience of the lived time of humans, endlessly expansive at one moment and suddenly compressed at the next.

Sue’s meticulous and subtle interventions shift her found objects away from their original life of functional measurement and redirect our thoughts to the immersive temporal space of making. Because they disrupt our expectations, we attempt to remake them in our minds by noticing every detail about them. And in the time that we spend contemplating these things we recognise, coiled within these dream-like objects, Sue’s time of slowed-down thinking and doing, of speculation and creative reverie.

Sue has an almost tender predilection for the modest objects that inhabit our lives, especially things that have been forgotten or damaged or that are past their use-by date. Rubber bands have been a particular favourite for some years and in this exhibition she turns her attention to them again. In Last Days of the Empire she grants sixteen abject, perished rubber bands a fragile necklace-moment by linking them together with discreet gold jump rings. Elsewhere she casts that relic of the bored wage-slave’s stationery drawer, the rubber band ball, in bronze.

These two works act as interesting companion-pieces. Both are forms of material doodles that link disparate objects and materials. But the qualities of Last Days of the Empire are fleeting and contingent, as though its material parts have come together for the length of a human thought. The rubber band balls, on the other hand, are ponderous and weighty, out of all proportion to their status as a trivial artefact of everyday life, as though the unremarked and unconsidered time to make them has ossified and expressed itself in material form.

Rubber and gold, rubber and bronze. There is a deft act of tongue-in-cheek ennoblement at the heart of this association of the worthless with the precious, the perishable with the imperishable, the most banal of objects with the metals of grave-goods and monuments. A jeweller’s joke perhaps, but a serious one for all that. For in the incommensurate lifespans of rubber and gold, rubber and bronze, we might also measure the incommensurate lifespans of humans and the objects that we leave behind.

If the exhibition’s title is an allusion to our experience of time, it might just as well refer to Sue’s methodology. There has always been a kind of precision in her work, never pedantic but always considered. Her work is a series of measured decisions in which she pares back the conditions of each exploratory intervention to the point where what is left is just enough to make the work legible.

This quality is particularly marked in The Shape of Things to Come, the works that seem to act as a coda to this exhibition. Here she cuts steel rods to a set of randomly determined measurements and solders them into structures. There is no pre-conceived plan to this, she simply “starts in one corner and builds from there”, as she puts it. The result is a set of objects that resemble the models scientists make to describe the structure of atoms or elements. However, unlike scientific models, Sue’s structures do not demonstrate what is already known. They are purely hypothetical and contingent, reaching out into space, potentially forever, or at least for as long as Sue continues to keep building them.

These are maps of the trajectory of her incremental making decisions, which are made manifest at every join in the structure. Significantly, each join is marked by a small bead of hand-formed thermoplastic impregnated with fluorescent materials that allow them to glow briefly in the dark, like the luminous faces of old-fashioned watches. In their faint glow we might read the marking of the minutes and hours of Sue’s labour, from the point in the corner where she starts to solder, to that time in an unknown future where she finally puts down her tools.

This project has been assisted by the Australian Government through the Australia Council, its arts funding and advisory body. 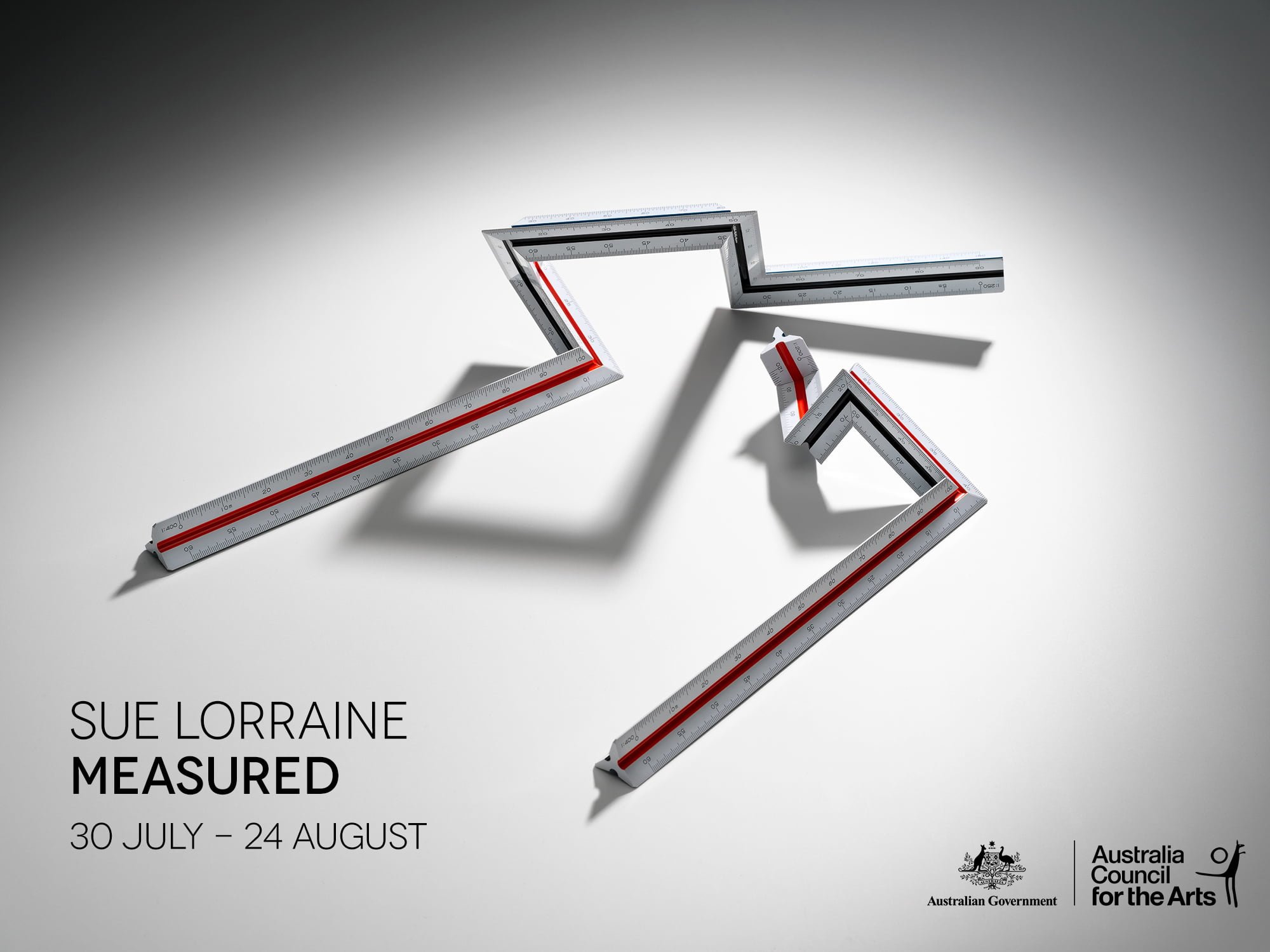 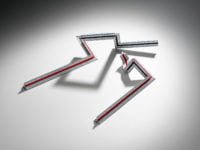 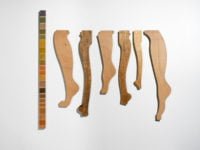 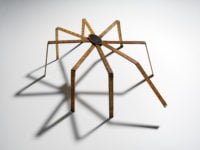 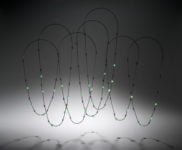 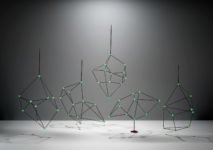 The shape of things to come, 2019, Heat coloured steel, luminous powder in thermoplastic 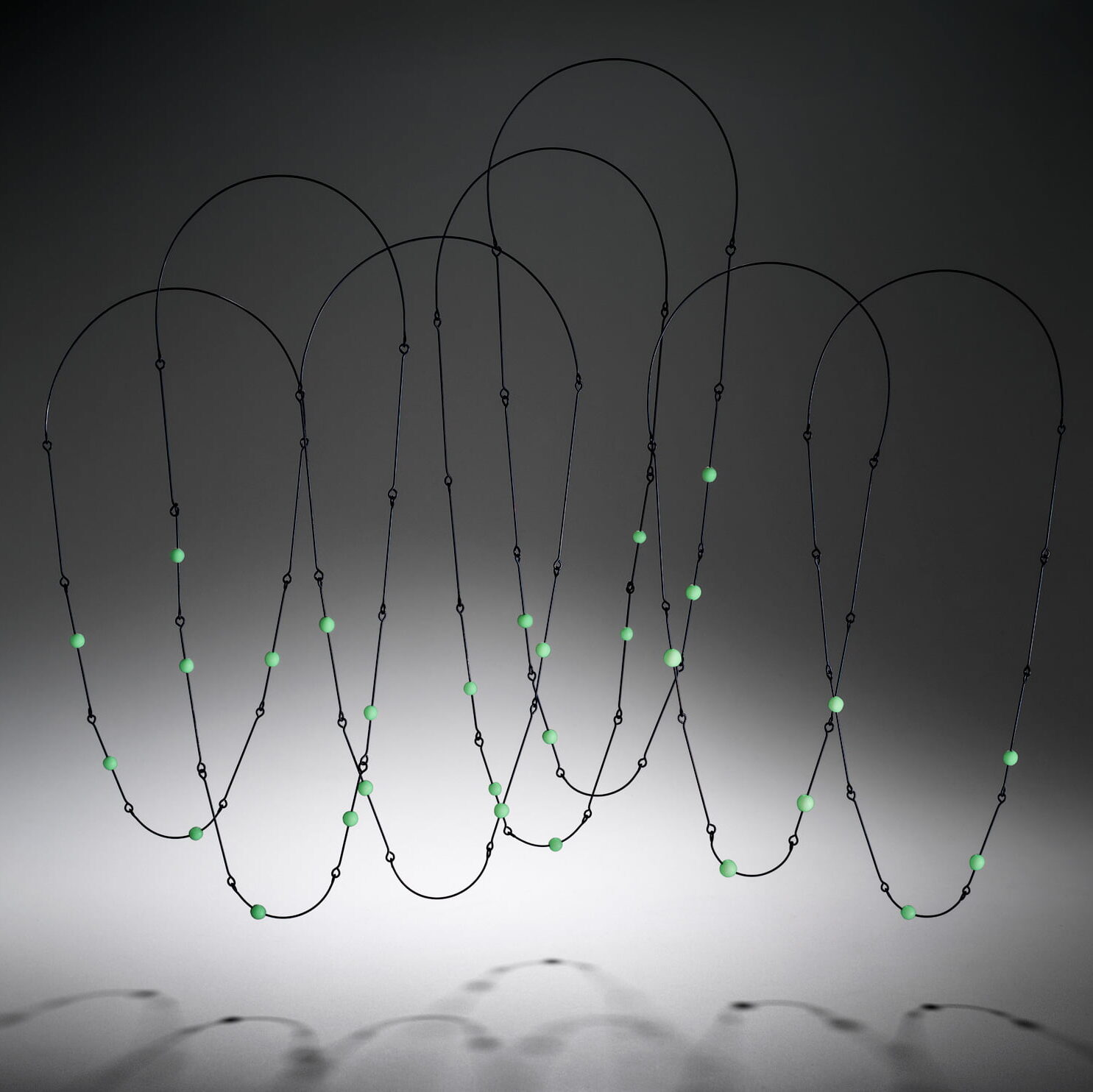